Why I Don’t Care About My Linux Window Manager

Conversations around window managers can be a little contentious…but for some of us, it makes very little difference. I’m one of those humans. As much as I adore nerding out around some ultra-minimal window manager that requires you change settings by compiling its c code, at the end of the day I gain little benefit from any specific approach.

That said, I do love and prefer Linux. The fact that we’re afforded these choices around window managers is what draws many of us in initially. Your computer, whether running Ubuntu or Arch, can flip a switch to run a very capable, heavy-weight manager such as KDE or a manager with a binary size of ~1mb, such as dwm. Before diving too deep into my day-to-day workflow, let’s set some primer around window managers.

Window managers come in two, primary, varieties. These include stacked and tiled. Tiled are commonly composed of several “workspaces”, which can be switched through and host one or many windows, tiled side-by-side. They (typically, by default) do not allow windows to stack or overlap. The following screenshot, from Wikipedia, demonstrates this for i3. 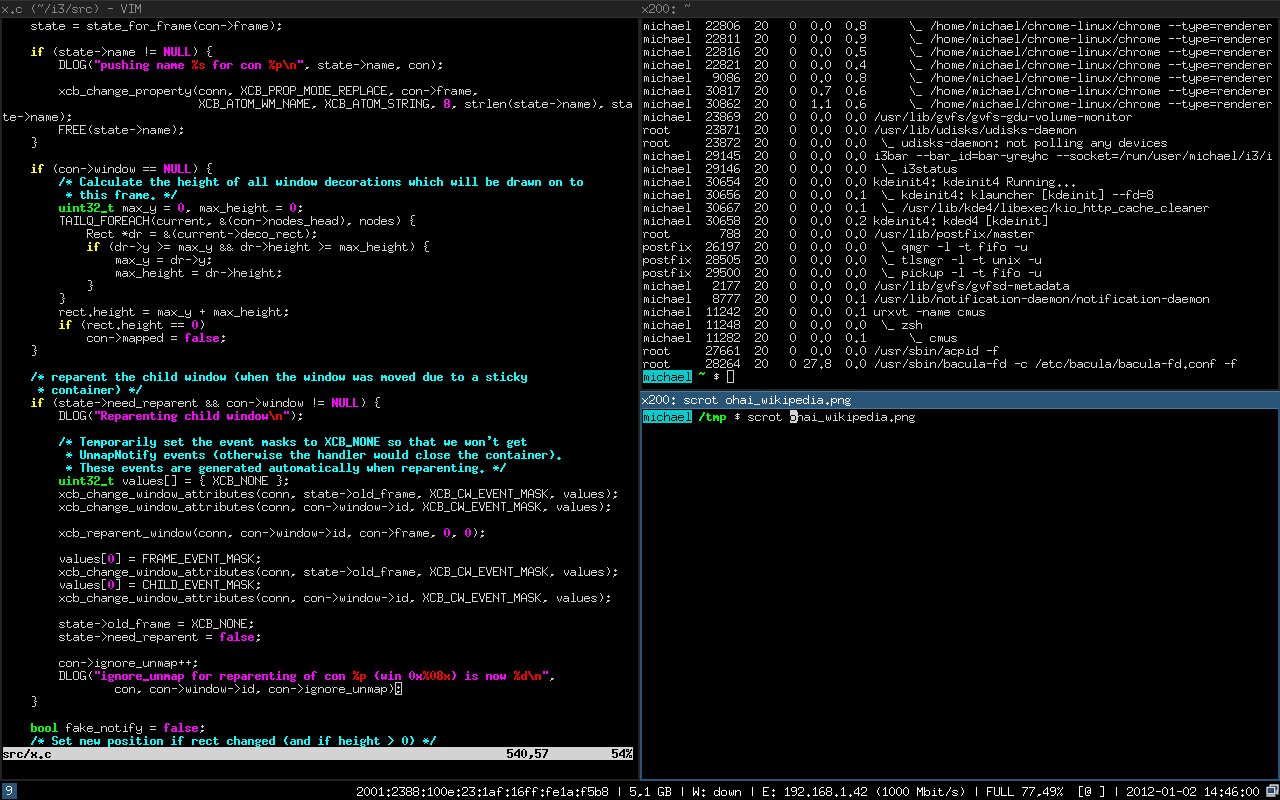 Stacked window managers, on the other hand, are what we conventionally think of. Especially those of us that have a history with OSX (mac) or Windows. These window managers give us floating windows that can overlap and be moved into any format on our screens. The following screenshot, from Wikipedia, demonstrates this for xfce. 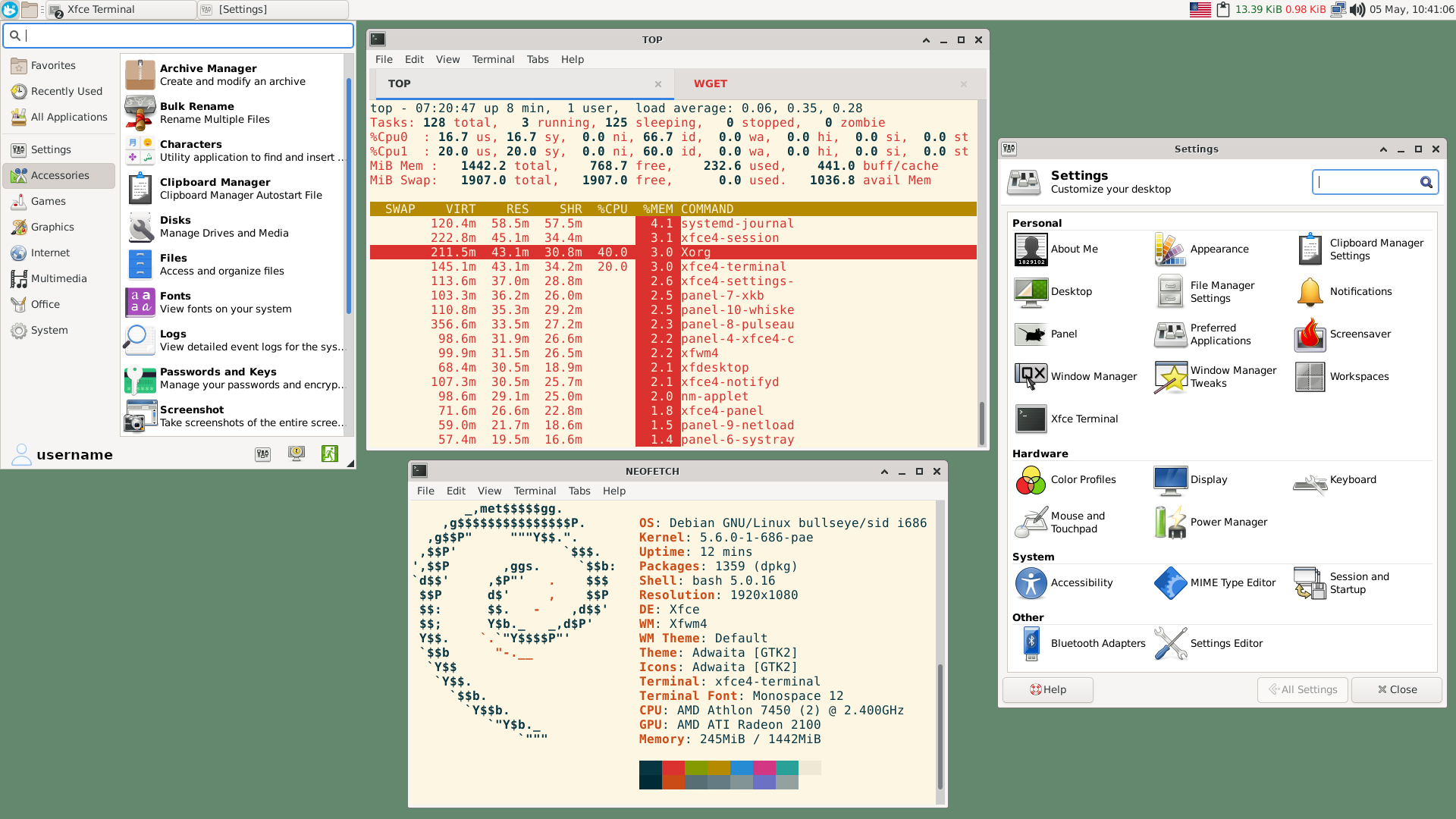 From my experience, many have associated the move to tiling managers as a more hardcore approach to interacting with Linux. Or at least one we associate with focus, minimalism, and/or getting things done. Over the years, some using i3 and others using dwm, I have found my productivity remain relatively static. I did have some super cool layouts that I loved looking at. However, I am a habitual over-optimizer. This trait sends me down constant rabbit holes of thinking through what workspace I should assign to which tasks, how I should be setting up a tiling layout for optimal focus, and many more considerations. Eventually I realized this constant customization was causing me more loss in focus than the gain I’d hoped to have leaving stacked managers behind.

In short, this was a me problem, not a tiling window manager problem. Knowing myself better now, I have switched back to stacked managers, with optimizations and automation focused around my key priorities.

My priorities around workflow are fairly straight forward. Given I have the attention span of a small squirrel, my key priorities are:

So switching between applications, this isn’t too hard in any window manager, is it? Sure, it is not. However minimizing the thought required to jump from a to b is huge for my work. For example, at the most intense end of the spectrum, clicking around and moving windows to find firefox is less than ideal. Even using flows like alt+tab or a launcher requires me to think about where the thing is or how to find/focus it. Additionally, the applications I care about and need to switch between are fairly minimal in quantity. There are maybe 7 total with 4 key ones I constantly toggle. These are:

For me, the question is, with a key or two, can I bring up the application I need to get the task done no matter where it preexisted. Additionally, if the app isn’t running, can I transparently launch it without being concerned about another shortcut or workflow? This is where my most important trick comes in, a script named lof (launch or focus).

lof is a simple script that does exactly what the name implies. If the app isn’t running, it launches it. If the app is, it focuses it. lof is not a unique solution. For example there is jumpapp, which is a far more capable tool than lof. I have chosen to write lof because it is less than 20 lines of shell script (when comments are removed), easy to understand, and handles 97% of my use cases.

lof can be found in my octetz/linux-desktop repository. I have another blog post on how I use this repo, if you’re interested. At the time of this writing, the script looks something like this.

lof’s goal is to determine if an app is running and if it’s not, launch it. If it is running, it stores the process id and correlates that to the window id. Once the window id is found, it focuses the window, using a tool called wmctrl. For example, my usage of lof for firefox is:

lof expects to resolve the exact command when it runs pgrep, this enables lof to be very specific around what window it looks up. If you’re interested in the gory details of how these pieces fit together, keep reading this section. Otherwise, you should skip to the next section.

To understand lof, it is important to understand how window ids and process ids are related. Technically, we can look up windows by their titles, however, many applications re-title their window based on the context of where the user is in the app. Thus, correlating process id to window id is preferable. Assuming firefox is running, you can lookup its window id with wmctrl.

In the above desktop, Arch Linux - Mozilla Firefox is clearly the firefox window. The process id is 5276 and the window id is 0x03200003. Since lof resolves based on the process’s command, we should look that up using the process id.

And just like that, we know that /usr/lib/firefox/firefox is the correct argument to send to lof. When lof /usr/lib/firefox/firefox is run, pgrep is used to resolve a process with that exact command. If pgrep returns no result, lof executes the command it was fed as an argument. If pgrep did find a result, it can use the process id to run the above wmctrl -lp command and resolve the window id via grep and awk.

It then uses wmctrl -iR to focus the firefox window.

And that end-to-end is lof! There are times where some apps, such as those requiring JRE, need more love than lof can handle. In those cases, rather than making lof smarter, I chose to write a slightly modified script. You can find an example with my lof_intellij script in GitHub.

The glue that holds this all together is the shortcuts or key bindings. For key bindings, I use xbindkeys. The reason I prefer it over other tools, is its generic approach to capturing mouse or keyboard events. Captured events can execute scripts in any window manager. This means that when I randomly decide to switch back to dwm, all my keys bindings come with me.

xbindkeys, assuming it is installed, can be added to your ~/.xinitrc file to launch when you start your window manager. An example of mine is:

The -p flag tells xbindkeys to poll the rc (configuration) file for changes. The last step is to setup this rc file to include the lof commands. The rc file is, by default, located at ~/.xbindkeysrc. On my machine, a some of the configuration look as follows.

You can see the many uses of lof. The quoted text is the script to be run when an event is detected for the key codes below it. xbindkeys offers a simple way to figure out these key strokes. You run xbindkeys -k and hit the key you want to resolve. For example, this is the result of mod (window key) + e:

Now, assume you want to use that as a keyboard shortcut for the GUI app blueman-manager (a bluetooth utility). With the app running, you lookup the command.

Now you can see the command is /usr/bin/python /usr/bin/blueman-manager. Due to the space, you must delimit it so it is treated as a space character and not a second argument passed to lof. Taking the information from the preceding examples, you can add the following to ~/.xbindkeysrc.

In short, over years of using many different window managers with different philosophies, I’ve found that the idea of easily triggering the app I need to get to is the real value add for any desktop experience. This is true for me and, at a minimum, hopefully this provided interesting perspective for your future Linux endeavors!josh @ taco (/tmp) []